skip to main | skip to sidebar

The Grandmasters unveiled in Berlin 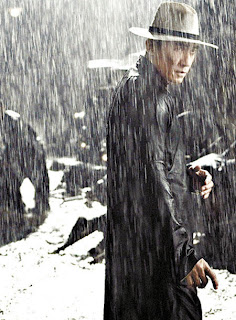 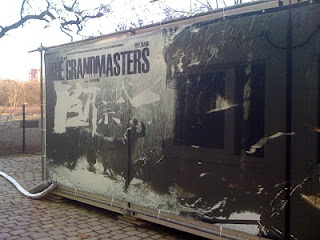 The Wong Kar Wai directed film THE GRANDMASTERS earlier unveiled lead actor Tony Leung Chiu Wai's GRANDMASTER look, surprising the American Film Market, leading to attention from buyers and fans everywhere and even started an online poster bid fever. THE GRANDMASTERS (YUT DOI JUNG SI) has been in production for awhile. In order to satisfy everyone's curiosity the film company would strike again by displaying Tony Leung and Zhang Ziyi's action sequences from the film at this year's Berlin Film Festival and demonstrate the GRANDMASTER fashion without holding anything back.

After Tony Leung's dark clothes and white straw hat Yip Man look in THE GRANDMASTERS was revealed, people proclaimed the birth of a Chinese super hero and a new icon of a dark warrior. Immediately it became the target of imitation in the business. Because Tony Leung's dark warrior in the rain look did not clearly show his face, this time the film company will display his heroic look fully in Berlin. Tony Leung's unique Yip Man look swept across Europe and America and started a GRANDMASTERS fever. Even European and American distributors would spare no expense on promoting this Wong Kar Wai kung fu epic at this year's Berlin Film Festival film market. They would attract buyers with Tony Leung and Zhang Ziyi's action sequences. Conceivably after Tony Leung and Zhang Ziyi, other key characters' unique looks in the film would gradually be revealed.
European distributors outside the film market center deliberately selected an eye catching spot, built two buildings and filled their walls with Tony Leung and Zhang Ziyi's GRANDMASTERS posters. In the poster Tony Leung used both fists and kicks and displayed his Wing Chun. Zhang Ziyi showed her eight diagram palm style and brought a refreshing look to everyone. Their stills surrounded the building walls and became one of the promotion focus. Wong Kar Wai broke into the European and American markets with IN THE MOOD FOR LOVE (FA YEUNG NIN WA), which also began one of the foreign films in the European market with the box office.

A blog with the latest news and info about Hong Kong film director Wong Kar-wai 王家衛.

"The script is finished, only when the film is done." - Wong Kar-wai